When I started to write this blog, I didn't intend it to go any further than the safety of our private Teach Different writing group. And even now that it is out in the ether, it is on a personal blogging site rather than a work one.  It's not just due to the swearing.  It's the personal and emotional content that makes me want to hide it away.  This is typical of me emotionally, but on reflection this makes me want to consider - why do I share certain things publicly, and not others? How does my identity differ depending on professional and personal context?  Hopefully, these are more things to explore through my writing, but now, here's for the blog...


When I saw the words 'Helsinki Bus Station Theory'  on Twitter, it was the Helsinki part  that jumped out at me. I've always been fascinated by Finland, not least due to Pasi Sahlberg and his theories of education, plus, slightly less intellectually, a penchant for snow and vodka.  It is somewhere I definitely want to visit one day - inspired by a great time spent working in Norway in a wooden chalet with Finns and Swedes (that's another story for another day, though). 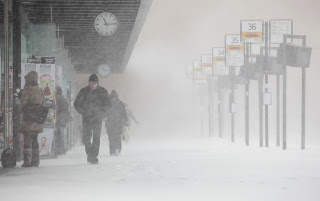 Anyway, back to the theory.  It suggests that having a creatively fulfilling career can be likened to a bus station (ideally Helsinki's, as I doubt it is quite as grimy and depressing as Leeds - the snow probably helps).  In Helsinki you have the choice of 24 different bus routes, likened to 24 different creative choices.  You choose a platform and get on the bus, but for the first mile or so, the route is exactly the same. The stops are identical, and each stop equates to a period of time of your career. After a couple, you start to become confident in what you are creating, so get off the bus.  You're proud of what you've created, but when you look around you see that someone else - that expert you're in awe of, for example, already got off at the same stop. You feel your work can't compare to theirs, and, frustrated, you head back to the bus station and start all over again.  Three stops later, the same thing happens.  You're stuck on the same route, always comparing yourself to someone else.

But... if you stay on the bus, you will find that the routes start to diverge.  At this point, you start to find your own original thinking.  Confidence emerges, and persistence pays off.

This theory was originally developed around creative arts, specifically photography, but when I came across it I realised that it could be applied to any career or life decision.  For a while, after changing my entire work and life plans, I have been considering getting off the bus.  A lack of confidence, a sense that I can never be the 'expert', an overwhelming inability to cope with the change has made me question the route, the destination, and whether I should have even taken the bus in the first place. Why did I leave the warm and familiar comfort of my car, when I always knew where I was going and was safe in the knowledge that I was in control?

But I also know that persistence is key to creativity.  When I think about some of my favourite writers - Ian McEwan, Kate Atkinson - I know that it isn't luck or some magic gift that makes them write in this way.  Atkinson's idea of a good day is to write just one sentence that she is happy with.  Just one sentence.  We seek out originality, often forgetting the sheer graft and guts that are required to uncover it in the first place.


At the moment it feels like I am on the worst kind of bus journey - through central London maybe, stuck in traffic and staring out at the rain.  But despite this there are some great moments, shared with some amazing fellow passengers who make me laugh, inspire me, and make me want to stay.  So sod it, I'm going to stay on the fucking bus.
Posted by sidebk at 05:55