So, since my visit to Utrecht I am doing that classic thing of seeing and making links to post-humanism everywhere.  From Paul Mason's 'Post-Capitalism' to the rewilding movement, Brian Eno's fantastic John Peel Lecture to Knausgaard's autobiographies ... the themes are varied but all circle around new ways of living, loving, and interacting with each other and the world around us. Decentering the human, moving away from identity politics, making being different 'from' NOT about being 'less', dismantling capitalism through affirmative politics and the creation of 'assemblages'*.  So much to unpick and so little time.  I've got an hour for this one, so time to get over myself and just write something down... 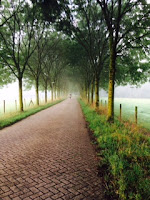 'The political is right here' - as Rosi Braidotti emphasised, both in her book 'The Posthuman' and during the lectures in Utrecht.  In order to move forward we have to start from our own bodies and situated practices, examining and drawing up our own cartographies, looking at where we are located and asking ourselves 'what have we forgotten to forget?'  In my last blog I came up with a series of questions about creating a post-human curriculum for education, but in this one I want to take a step back, by thinking about my own standpoint and some of the ties that bind us to old ways of thinking.

One of the key themes of the summer school was art - a surprising and an additional challenge for someone who considers themselves a bit of a philistine.  But soon I was wondering - why do we always have the separation of art from science or the humanities? The idea of art and science being 'paths along the same track' is exciting and in itself opens up possibilities and new approaches. I had seen for myself students writing poetry and creating art in a teacher education class, so it was probably time to revisit my own stance and examine my resistance to it.

Modern art was always a bit of a standing joke in my family.  I remember my Grandad visiting the Tate Modern and showing him Carl Andre's 'Equivalent V11' (forever after known to us as 'the bricks').  Cue outrage ('this isn't art!') and much mirth for years after. (We took him to Covent Garden the same day - as a previous barrow boy who worked the original fruit market there in the 1920's, he was pretty disgusted by that too).

The art shared with us in Utrecht was unsettling and pushed all the boundaries.  Perhaps the most startling piece of all was Uterus Man, about which I will say no more but encourage you to watch it for yourselves:

(My first reaction (as @teachnorthern will testify) was the incisive and articulate 'what the fuck?!'   I would love to know what your reaction and thinking is about Uterus Man, so please share your thoughts here :)

The kind of art we were talking about in Utrecht was not 'art that is', but 'art that does'. From the refugee art of the 'We are Here' collective in Holland, to Aernout Mik's amazing 'Cardboard Walls', which addresses, through the lens of the Fukushima nuclear disaster, the way that the things we thought we controlled (nature and capitalist doctrines) can take charge of our lives and overturn them.  The common thread of post-human art was an affirmative ethics, and the encouragement of living a certain way in spite of capitalism, and not against it.  The art of Pussy Riot is examined here in a talk by Rosi herself; an example of radicalism which is oppositional but not negative: https://www.youtube.com/watch?v=i5J1z-E8u60

Art is being restructured and refusing labels; we need a new vocabulary for the concepts, liberating and opening our minds along the way.  The pervasive 'anti-intellectualism' in our culture doesn't help us to access art of any kind, or seek out its use for positive change.  (As someone who apologetically calls herself a geek in their Twitter biography, and keeps her writing hidden from friends and family, I am guilty of denying this aspect of myself.  But as Rosi would say, it is time to 'get over ourselves'.) Art, whether a pile of bricks or a superhuman womb, gets you talking.  My challenge to myself is to keep an open-mind and continue to push my own boundaries; not switching off when I see something I don't get, but switching on, and looking for the questions that move me forward.

One of the most exciting post-humanist notions is around the creation of 'assemblages' - informal, rhizomatic groups of thinkers which may pop up unexpectedly and subversively, just like the mushrooms dropped and growing after leaving the farm at the end of my road.  In this week alone my thinking has been inspired by at least 50 writers on Twitter, friends @bobby_gant and @leehughes84, colleagues and students.  Most will not know each other but many are connected in different ways.  The potential and affirmation of these subversive groups is made more powerful by the nomadic, unexpected nature of the connected thinking... thanks to all.